I beta read for Alex and I thoroughly enjoyed his latest book as well as the others in the series. 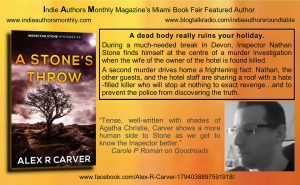 The whodunit, A Stone’s Throw, is Alex R Carver’s latest release in his Inspector Stone’s series. The pre-order price for the Agatha Christie-style murder mystery is 99 cents. Buy now at:https://www.books2read.com/b/31xo0w.

About the author: Alex R Carver

After working in the clerical, warehouse and retail industries over the years, without gaining much satisfaction, Alex quit to follow his dream and become a full-time writer. Where There’s A Will is the first book in the Inspector Stone Mysteries series, with more books in the series to come, as well as titles in other genres in the pipeline.

His dream is to one day earn enough to travel, with a return to Egypt to visit the parts he missed before, and Macchu Picchu, top of his wishlist of destinations.

When not writing, he is either playing a game or being distracted by Molly the Yorkie, who is greedy for both attention and whatever food is to be found.

You can find out more about Alex R Carver at the following links:

Jennifer entered the room on Nathan’s heels, though she had to stop almost immediately as Nathan halted, forcing her to lean around him so she could see the room. Her eyes were drawn to the bed and what it held but she immediately spun away, her stomach heaving as she fought the urge to throw up.

It wasn’t that she could see much, except for the handle of the knife and a small red stain, but the knowledge of what she wasn’t quite seeing was enough to make her nauseous.

“Is he…is he dead?” she asked in a hesitant voice, afraid that the mere act of talking would be enough to make her lose control.

Nathan could guess at the answer, based on what he could see, nonetheless he moved forward and shifted the pillow out of the way, so he could press his fingers to Jean Martin’s throat. A single touch was enough to confirm what his eyes had already told him; the chef had been dead for some time, hours, he could only guess at how many, but even being covered up hadn’t helped to keep his body warm. He was as cold as only a dead person could be.

“He’s dead,” he said with a sad nod as he looked down at the deceased man. He realised that it was irrational, but he couldn’t help feeling that the murder was his fault; if he had been cleverer and quicker he would have linked the tenderiser to Martin yesterday, and by doing so he could perhaps have prevented him being killed. “Damn,” he swore briefly, venting his emotions before turning to Jennifer. “When you feel up to it, would you mind finding Constable Havers and bringing him here?”

Jennifer nodded weakly and left the room. She was glad to be away from the body of the man she had known for the past two years, but she didn’t think she would be able to forget the look on his face that had been revealed when the pillow was taken away. She stumbled down the passage towards the stairs, and as she did so she wondered how life could have changed so dramatically for her in such a short time.