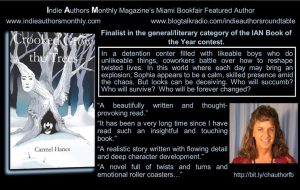 This raw and thought-provoking fiction tackles the “why” behind the incomprehensible, as we meet likeable youth who do unlikable things. In a world where not all prison walls are visible, the characters, young and old, struggle to overcome their pasts as they are caught in the turbulence of relationship conflict and a culture torn between punishing and helping.

A suspenseful read to a shocking conclusion, it is sure to spark strong reaction and lively debate. Realistic and believable characters, delicious prose, and a mesmerizing plot will keep you turning the pages. Crooked Grow the Trees can be purchased at: Buy on Amazon: http://bit.ly/Crookedgrowthetrees

About the author: Carmel Hanes

Carmel Hanes is a retired school psychologist who worked in public and correctional schools with students who experienced learning and behavioral challenges. She enjoys hiking through nature, in all its forms, with her husband of 38 years. Her debut novel was inspired by her work with injured souls, and the troubled world she sees around her.

You can find out more about Carmel Hanes at the following links:

Panic increasing at the sound of punched flesh and skull cracking against cement, Sophia pulled harder on any fabric she could grasp and pushed the person wearing it towards the nearest wall, procedure and policy of not touching the youth out the window in her need to get to Aiden. Behind her she could hear the shouts of teachers as they tried to herd the agitated youth back into the classrooms or at least against the walls.

The energy of those continuing to watch amplified. Quinn’s reputation was well known, and his peers knew that his entrance into the battle would be an even more impressive show. Not only was this far more entertaining than school, or daily life on the unit, but it allowed a momentary purge of buried frustration, a long-distance release of futility. It was intoxicating; a dangerous moment, infused with emotional lightning, making one feel energetically alive. Sophia knew better than to attempt to physically control two feuding teenage boys, so she turned her attention to the throng of on-lookers and Aiden.

“Back to class or line up on the wall!” she repeated in the loudest voice she could muster in her anxious state. “You know the procedure!  Anyone not complying will face unit sanctions!”

It was a feeble attempt, she knew, but she couldn’t just stand there and do nothing. As she shouted at the crowd, she knelt down next to Aiden to check on the damage.

“Aiden?” she probed, “How are you doing?  What hurts and how badly does it hurt?” She gingerly touched his arm while inspecting his bleeding face at closer range.

Aiden opened the eye that was now swelling shut, rousing himself to see who was talking. “Number 301 on ways it would piss me off to die. Having a trained monkey with half my IQ manage to crack my head open so my impressive brain spills out. Just doesn’t seem right, does it, Miss Sophia?” Vague hint of a wry smile moved his lips prior to a grimace of pain.

Slightly reassured that he could still speak and appeared mentally intact enough to conjure an insult, Sophia told Aiden to stay as he was while she turned her attention to the continuing conflict. Standing again, she renewed her attempt to guide students to the walls or classrooms. The first three boys scowled at the directions but complied, taking several steps away from where they had stood, turning to face the wall.