The answer to that is probably the same as ‘how long is a piece of string?’ The time taken to pen a novel largely depends on the time you have available to dedicate to the task at hand, coupled with how long you intend the book to be. Personally, I decided to write short books. That way, if no-one read it, I’d waste less of my time! Having yet to be discovered and given a six-figure advance by a publisher for future works (I’m laughing as I type), like a lot of self-published authors, my latest book was written alongside running my other business and looking after my family and home. I started serialising Missing Remnants on Radish Fiction (to the rapturous applause, gratefully received from one person) back in September 2017. I am about to publish it everywhere else in May 2018.

Serialising a book in that way is probably not something I will do again. I wrote the prerequisite two-thousand-word chapter, edited it (missed some stuff) and published one chapter a week until the story was finished. It was an added layer of stress I didn’t really need but it became a challenge to see if I could pull it off. I rarely back down when I’ve set myself a challenge like that. Despite not appreciating the constant deadline, I managed it. I just probably shouldn’t have started serialising a second book before finishing the first. I finished the second one too. Two books in less than six months. And breathe! It certainly felt that way.

So, I have a detective called Track who lives and works on a space station. The story leads him to investigate the disappearance of a group of amputees called Remnants. Why pick on a bunch of amputees? Haven’t they been through enough? The inspiration for the story sits mostly within the Paralympics. Whether this is an urban legend or a real story, I’m not sure. What I heard was one country was asked who they were sending to the Paralympics and their answer was no-one, we don’t have any disabled people here. Excuse me? You have no disabled people in your country? None? I’m not sure that’s statistically possible. Now, I haven’t lost any limbs, but I do have a disability which affects my everyday life. I can tell you right now if someone tried to deny my existence I would be all shades of livid. The Remnants in my story are in a similar predicament. They are considered a burden to a society who would rather deny they existed. As many people with disabilities do, they battle on. The human body might be different, the spirit fights. Sometimes, even that needs some support.

Track has a desk in his apartment he laughingly calls his workshop. The desk itself is mostly based on my husband’s desk in our first house. We had the run of a three-bedroom house and we didn’t have children at the time. So, we slept in one room and had another bedroom each as a study. Those were the days! My desk had a computer on it. Danny’s had, well, stuff. Electronic stuff I couldn’t begin to name. There were thingamies and widgets and doofers. I have no idea. Danny is very good, and I mean VERY good at fixing things. Couple that with the 2012 Paralympics. I saw a short behind-the-scenes film where people with knowledge and a will to help waited to see what kind of problem might turn up to be fixed that day. Whether it was an arm, a leg, or a chair, there were people trying their best to make sure the athletes made it to the start line. Oh yeah, I thought. Of course, the athletes wouldn’t all have teams of people travelling with them to fix things. I doubt they all have huge sponsorships. They’d have to rely on the services available in the athlete’s village.It was a tiny visual into a life I had not experienced that gave rise to an imperfect character with a desire to just make things a bit better.

Go get ’em Track, they’re somewhere on the Si-Cross Four space station and they need you. 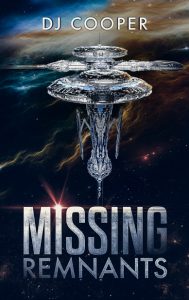 Detective Track is a good cop who can’t keep his mouth shut. He’s suspended just for doing his job.

Cut off from resources and official backup, he must do what the Authority won’t and investigate the disappearance of the missing Remnants. The vanishing group’s only crime was to survive the recent biological outbreak. Now, they’re considered a drain on society.

Track’s apartment is ransacked, he’s followed, attacked and hampered by an injury. His medication and cryptic messages from someone he knows to be dead threaten his sanity.

Is he losing his mind or is something sinister at play? The truth is more twisted than he ever imagined.