While I was working on my part of a multi-author anthology, I picked up an award from Indie Authors Monthly Magazine.

Naturally, I’m thrilled. Detective Track is probably muttering to himself whilst hobbling around Si-Cross 4 and wondering when his sequel will be finished. 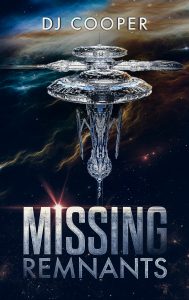 Another thing I didn’t know would happen this year: 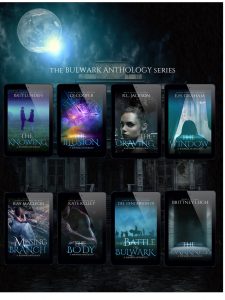 That’s mine, number 2 in the series: The Illusion.

Things are not what they seem in the small American town of Bulwark.

Hospital lights flicker for no reason. Townsfolk are overcome with a salacious appetite for the demise of others.

A café opens in town. The food is great. It’s the unexpected distortions in time and the surrounding world that make Peter question his mind and his grip on reality.

The multi-author anthology is set in Brit Lunden’s small American town of Bulwark. Paranormal phenomenon, strange creatures, unfathomable events and strange puddles of green goo. Each book can be read as a standalone story or as part of the anthology.

Living and working in South East England, DJ Cooper is an author of science fiction with a flair for humour and the bizarre. A wife, mother and business owner, she splits her time between many things, rarely completing anything. You can follow her at https://medium.com/@debzcooper where random thoughts are regularly unleashed onto an unsuspecting public.

“I liked how the author worked in diversity without forcing huge political statements or slowing the narrative. The book moves quickly, filled with twists from the investigation and futuristic tech, but not enough to overwhelm readers. Track is a likable character for the good he does despite how hard he works to push people away. The story puts the reader in his head, which shows the author has a quirky sense of humor I found refreshing.”

“Love everything about this book. Love the story, the characters. DJ Cooper writes in such a way that you feel like you know the characters and they have been a part of your life since…forever… Whether is a space station or a small town in Cleveland, the stories have characters who drive the plot and the film noir patina give them depth and diversity. Fresh, fun, and a pleasure to read.”

“What was most enjoyable about the story was the author’s ability to make Track a likeable person despite his somewhat ornery presentation. Humor was present throughout, making it an amusing read, even as it dealt with serious subject matter. Not everyone can pull off sarcasm in a character without making the reader dislike the person, but DJ Cooper has a knack for making us like someone even as we may wince at their tongue-in-cheek narrative and thoughts. Track reminded me of Indiana Jones, which is not a bad thing at all!”

“The world building was excellent. From the very first paragraph, I was completely immersed in the highly regimented and futuristic society that Detective Track lived in.”

I’d tuned out most of the chatter behind me as I concentrated on system reports. I was ahead. It put me in uncharted territory. The summons came after lunch. Si-Cross Four is a large off-world space station boasting many places to eat. It didn’t matter which I chose, I always found a small group of people who required off-menu items. They couldn’t all have allergies to the latest food considered the devil’s work. I was five minutes late back. And that was only because I’d stopped to help clear an area resulting in the initiation of a chemical spill false alarm report.

“Detective Trackneathan, my office,” my commanding officer Beynard issued in the tone of voice you did not ignore. Not unless you wanted them removed with a rusty knife and handed to you on a platter. I logged off and pushed myself out of my chair. The chip in my knee holding the joint together dug in and I winced. Yeah, I was on a list for a permanent fix. It came with the caveat I shouldn’t hold my breath.