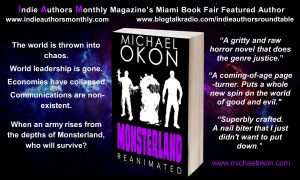 After Monsterland has imploded, the entire world is thrown into chaos. World leadership is gone, economies have collapsed, and communications are non-existent. Wyatt must go beyond the boundaries of his small town to reestablish contact with the outside world, and alert the government about a traitor-in-chief. During his journey, he discovers a new threat released from the bowels of the defunct theme park. When an army of relentless mummies, a life-sucking ooze called The Glob, and a hybrid reanimated Behemoth rise from the depths of Monsterland, who will survive?

Michael Okon is an award-winning and best-selling author of multiple genres including paranormal, thriller, horror, action/adventure and self-help. He graduated from Long Island University with a degree in English, and then later received his MBA in business and finance. Coming from a family of writers, he has storytelling in his DNA. Michael has been writing from as far back as he can remember, his inspiration being his love for films and their impact on his life. From the time he saw The Goonies, he was hooked on the idea of entertaining people through unforgettable characters.

Michael is a lifelong movie buff, a music playlist aficionado, and a sucker for self-help books. He lives on the North Shore of Long Island with his wife and children.

“Though this book works as a stand alone, starting from the beginning of the series will result in a fuller reading experience, especially since Monsterland Reanimated closes on a riveting cliffhanger. A coming-of-age page-turner, Monsterland Reanimated puts a whole new spin on the world of good and evil.” – Reviewed by Anita Lock for Foreword Reviews

“Monsterland Reanimated (Monsterland Series Volume 2) by Michael Okon is a well-written book that reminded me of a mix of the TV show The Walking Dead and the Jurassic Park movies. The author truly set this book apart from the Jurassic Park movies with how he explored the way the park’s implosion affected the rest of the world and the people in it.” – Reviewed By Sefina Hawke for Readers’ Favorite

“I had not read the first Monsterland novel, but really it is not necessary to have done so before reading Monsterland Reanimated. Author Michael Okon gives us the backstory very well as events unfold in the new story. I would never have believed a novel about zombies, shape-shifters, and monsters in general would captivate me quite the way this one did and that is a real credit to the author. I found his writing style and dark humour, with some subtle and not so subtle pop culture references, to be immensely enjoyable to read.” – Reviewed By Grant Leishman for Readers’ Favorite

“Monsterland Reanimated features a riveting plot and an arresting narrative voice that combines with the exciting dialogues to create a reading experience that is perfect for fans of horror. This is an engrossing read with conflict and suspense that will keep readers turning the pages. An electrifying read!” – Reviewed By Romuald Dzemo for Readers’ Favorite

“Careful thought and consideration have gone into each character and their own individual history and plot, adding to their depth and believability. There are some great action scenes which only serve to enhance a well-executed and conceived plot. The stakes have been raised and, as a reader, I find myself eagerly awaiting the next book in this imaginative and thrilling series. ” – Reviewed By K.J. Simmill for Readers’ Favorite

“Monsterland Reanimated is not simply a fast paced action novel, but an experience.  It is as if the reader is immersed into an entirely new world, not simply a story about a monster themed theme park, but rather transported into an alternate reality of a post apocalyptic world.  Okon’s detailed account is authentic, and told in a matter of fact narrative, that makes the reader almost believe this is a true account of events that could possibly happen, given the right circumstances.” – Patricia “Lemon Bee” Dompieri, RN

“If Monsterland was thrilling then Monsterland Reanimated is heart-poundingly thrilling, edge of your seat exciting and a much more action-packed, captivating and harrowing story.” – David Savage, What’s Good To Read

” … a captivating and thrilling page-turner …” – The Children’s Book Review

“This fast-paced thriller will keep readers in suspense as the action dramatically unfolds. Sure to delight fans of dystopian fiction, science fiction and horror, Monsterland Reanimated is a worthy second installment in the Monsterland series.” – The Children’s Book Review

“A sense of wonder reflected in stories like Charlie and the Chocolate Factory coupled with the nonstop action of Mad Max and the existential horror of The Walking Dead makes this a delightfully creepy read. Monster aficionados young and old will love this series.” – Reviewed by BlueInk Review, Starred Review

“The characters are a treat to follow. The main protagonists are seniors in high school. In some ways, they are typical teenagers arguing about which monster is more powerful. Still, they are forced to grow up fast. Other young adults would find pieces of themselves in many of the characters.” – Reviewed by Cecilia_L for OnlineBookClub.com

President of the US, World Leaders, and Thousands Dead

The Night After the Monsterland Catastrophe

A bright moon painted the desert’s surface pewter. Here and there, dark spots soiled the landscape like oil spills. Most of the bodies had been taken before the troops were ordered to leave. They carted away the corpses, bulldozing the zombies into mass graves, until radios chirped with urgent orders deploying the soldiers to the bigger threats that erupted in the main cities like a chain of angry volcanos.

Monsterland was extinguished, its carcass left for the vultures to pick, the exhibits silent as a tomb.

The dead president and his equally dead entourage were whisked away on Air Force One, along with the dark-clad special operatives that came and left like the brisk desert wind that now howled through the empty streets.

A gate screamed in the silence, slamming with a reverberating smash. The uneven gait of someone with a physical challenge filled the void. The scrape and plod of his limp echoed against the wall of mountains framing the theme park. His labored breathing huffed as he made his way down the streets.

A door creaked loudly as it was blown by the wind. He stopped, his distorted figure silhouetted in the pale moonlight, his body turning silver. He looked at the broken glass littering the pavement like diamonds, then up to the still, pre-dawn sky. He considered the sun peeking over the jagged horizon in the east, its golden light painting the dips and hollows of the hills. Soon the coming day would chase the darkness away.

Time was the enemy now. He had to move faster, or it would be too late. He picked up his pace, lurching along the winding road. A keening howl ricocheted through the streets, bouncing off the walls. It sounded like a… no, he thought, it couldn’t be. The werewolves were all dead. Destroyed by Vincent Konrad when he made their heads explode.

The old man paused, listening for it again, and was not disappointed when the animal whimpered. He gauged it to be inside the defunct vampire exhibit. He moved toward the entrance. The storefronts had been destroyed. A few body parts lay on the pavement, as if people had discarded them in a rush. He heard the scraping of paws on the street and a shiver went down his crooked spine. 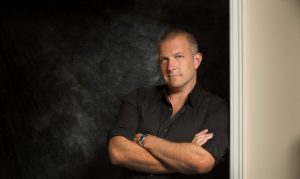