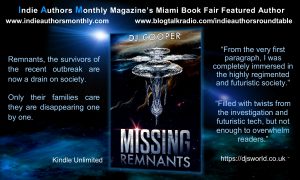 Detective Track is running out of time. A great cop with an attitude, he finds himself suspended. His career is on the brink of destruction.

Cut off from resources, Track is dragged into an investigation the Authority tried to close. Remnants, the survivors of the recent outbreak are now a drain on society. Only their families care they are disappearing one by one.

Track’s apartment is ransacked, he’s followed and attacked. Medication and cryptic messages from someone he knows to be dead threaten his grip on reality.

Is he losing his mind or is something sinister at play? The truth is more twisted than he ever imagined.

DJ Cooper is about 300 years old, writes science fiction/humour/weird, hails from another planet and is married with two teenage kids.

The family has a house full of animals. Tropical fish, a degu called Sam (a small fluffy thing with a long tail, bigger than a hamster, smaller than an elephant.) Crunch the tortoise fits in the palm of a hand. He/she/who can tell, eats, sits under a light, digs, sleeps, grows, doesn’t talk yet. Cossie the bearded dragon talks and can fly whilst breathing fire. She’s well trained. There hasn’t been “an incident” with the fire brigade in months.

DJ runs a small business, has been known to hammer out tunes on the piano and probably has veins filled with caffeine.

“I liked how the author worked in diversity without forcing huge political statements or slowing the narrative. The book moves quickly, filled with twists from the investigation and futuristic tech, but not enough to overwhelm readers. Track is a likable character for the good he does despite how hard he works to push people away. The story puts the reader in his head, which shows the author has a quirky sense of humor I found refreshing.”

“Love everything about this book. Love the story, the characters. DJ Cooper writes in such a way that you feel like you know the characters and they have been a part of your life since…forever… Whether is a space station or a small town in Cleveland, the stories have characters who drive the plot and the film noir patina give them depth and diversity. Fresh, fun, and a pleasure to read.”

“What was most enjoyable about the story was the author’s ability to make Track a likeable person despite his somewhat ornery presentation. Humor was present throughout, making it an amusing read, even as it dealt with serious subject matter. Not everyone can pull off sarcasm in a character without making the reader dislike the person, but DJ Cooper has a knack for making us like someone even as we may wince at their tongue-in-cheek narrative and thoughts. Track reminded me of Indiana Jones, which is not a bad thing at all!”

“The world building was excellent. From the very first paragraph, I was completely immersed in the highly regimented and futuristic society that Detective Track lived in.”

I’d tuned out most of the chatter behind me as I concentrated on system reports. I was ahead. It put me in uncharted territory. The summons came after lunch. Si-Cross Four is a large off-world space station boasting many places to eat. It didn’t matter which I chose, I always found a small group of people who required off-menu items. They couldn’t all have allergies to the latest food considered the devil’s work. I was five minutes late back. And that was only because I’d stopped to help clear an area resulting in the initiation of a chemical spill false alarm report.

“Detective Trackneathan, my office,” my commanding officer Beynard issued in the tone of voice you did not ignore. Not unless you wanted them removed with a rusty knife and handed to you on a platter. I logged off and pushed myself out of my chair. The chip in my knee holding the joint together dug in and I winced. Yeah, I was on a list for a permanent fix. It came with the caveat I shouldn’t hold my breath.